The Fly and the Fool on the Hill

There it stands, looming before me, it’s white crown poking the clear blue heavens-Mount Shasta-a mighty fortress, rising proudly, majestically, from the lowly valley. It is the birthplace of legends, home to the mystical Lemurians, the world’s oldest and wisest civilization , and keepers of the paranormal, the supernatural, the transcendental, the unfathomable, the miraculous, and any other big-syllable metaphysical word one can conjure up. I drive up 1-5, not in my wheezing Mazda pickup struggling to adjust to the new-found heights, but in a chariot driven by the horsepower of 150 white stallions. This will be my first spiritual hour. A significant marker on my road to enlightenment. How long have I traveled? How many books have I read ? Seminars attended? Gurus followed? Crystals polished? Chakras opened? I have worked hard and long to achieve higher consciousness, and today, at the top of one of the highest spiritual points in the kingdom known as California, I will find my reward-no reward is too small a word-my anointment, my initation, heck, my inauguration into the higher realms! To say I am emotionally primed for a transformative event is an understatement of cosmic proportions.

I have heard much about this New Age Mecca, frequently told to me in reverent whispers throughout numerous coffee houses, bookstores, and self –help workshops across the great divide. Those in the “know? say Lemurians, direct decendants of Adam and Eve, still live on the mountain and if you are truly prepared they will make contact with you. I ‘m told many people experience prophetic visions, illumination and even ascension into the realms whee Ascended Master’s await! I’m ready! Boy am I ready! Sitting next to me ,my wife takes a more down to earth approach,? oohing? and “ahhing? at the simple beauty of the mountain, and wondering aloud if there are any good places to eat. How she can even think of eating at a time like this is beyond me and my higher –than-thou revelry, but I say nothing , keeping my judgment to myself like any enlightened master. I take my ability to remain silent as yet another sign of my preparedness for higher realms and begin going over my speech to the Lemurians.

We stop for gas at a little town of Shasta. I keep my eyes glued for anyone with a protruding bump on their forehead-a supposed sign of being a direct Lemurian descendent, but alas, everyone here looks pretty much like anyone else-if not worse: the gas station attendant shuffles about looking horribly hungover and the cashier sits glassy-eyed behind the counter flipping through a wrestling magazine and puffing on a Kool . I quickly let my tinge of disappointment pass – the Lemurian must be waiting for me further up the mountain.

The ride up the mountain is filled with nervous anticipation as I strain every which way looking for something mystical to take place. My wife admonishes me to keep my eyes on the road ahead, but I pay little heed. Who knows what phenomena the next turn will bring? However, the closest we come to the paranormal is a brush with death via a close call with the front end of a Winnebago.

The road to MT. Shasta ends in a parking lot at about 12’000 feet. Here hikers, bikers, and other vacationers stroll the grounds, camping and picnicking, just like at any other park. Yet, before disappointment can set in, I spot an old trail that ascends further up the mountain. It is overgrown with brush and obviously hasn?t been used much these past few years. Eureka! I cry as I get an intuitive flash that this seldom used trail will take us to the promised land beyond the area designated for the commoners. A place where only the elected are allowed to enter!

I urge my wife along, and we climb the mountain to the snow line, following a trail away from the crowds and into the vestiges of vegetation. Finally, we reach “The Place? – a ridge high above the road offering a beautiful view of the Sierra mountain tops as far as the eye can see. It is nature at its most majestic and re- splendent. “This is the place!? I exclaim and my wife seems relieved that I have finally found whatever it is I’m looking for.

I sit down to enter into what I have already proclaimed as my “ greatest meditation ever? while awaiting higher contact with my Lemurian hosts. However , no longer than a few seconds later the peace is interrupted by a peculiarly familiar and annoying buzz. I open my eyes and come face to face with the biggest horsefly I’ve ever seen! Quicker than you can say OM, I leave my newfound peace and tranquility and sink into my familiar world of rage and aggravation.

“How can people be so inconsiderate as to defiles these holy grounds with their garbage! Don’t they have any respect for the sacred? No wonder the world is going to hell! I close my eyes and blindly swat the fly away, but it does not take the hint. In fact, it seems to become bolder with every swat of the hand, buzzing ever nearer to my nose , ear and mouth. After a few seconds , that seemed like an eternity, I jump up in a fury, swinging wildly at this annoying pest. “Get out of here before the Lemurian come! Can’t you see I’m awaiting higher contact? Finally, after dodging several flying fists, my fly takes flight.

As I sit back down I see my wife several yards away meditating peacefully. Her face looks absolutely radiant as she seems to bask in the light of total peace, contentment and joy. I hate her for it, I close my eyes and restart my meditation, yet no sooner do I clear my mind, than my tranquility is once again violated by the annoying buzz of the fly. This time my intellect kicks into high gear as I plot it’s impending doom. I will get this fly if it’s the last thing I do!

I don’t move as it buzzes my ear like one of those barnstorming biplanes at an air show. Instead I wait, like a cat perched on a windowsill, for the fly to land. Using every psychic mind trick in the book I order it to land where I can get a good look at it. Being a receptive fly it responds almost instantly, making itself at home on a patch of my arm hairs. Slowly, I bring my free hand up. One well-placed whack and my peace will be restored. The fly, oblivious to my presence, begins to clean itself of whatever debris a fly finds filthy. I slap my arm with deadly precision, yet upon lifting my hand to view the remains I am instead confronted with its miraculous getaway! The realization of the fly’s great escape and the fact that it is once again barnstorming my ears, sends me into a rage not seen since the days of the Old Testament. I jump up with my arms flailing about as I chase the fly down my sacred trail. Now I am one with the thought of killing this fly! This maniacal insect has ruined my life and any chance I have of making contact with a Lemurian or an Ascended Master, or even one of those roly-poly Cherubim or Seribums for that matter!

And then suddenly I stop running –to this day I’m not sure why. Maybe it was the beauty of the mountain tops before me, or the melting snow that had leaked into my sneakers, or maybe it was simply the utter futility of chasing a fly or the dreams of finding spiritual validity through someone or something outside myself. Whatever it is, it causes me to stop and stand in wonder and awe at the beauty around me. To marvel at the silence . To feel in the vast aloneness of this glorious mountain top a connection to the very Essence of my being. I go back to my spot and sit down. No sooner do I settle in than the fly returns, but this time it’s okay, everything is okay as it is, and I realize that if I just accept things as they come I will find what I am looking for.

The fly, seems my calmness, perches itself upon my shoulder and we sit there , the fly and I, for a long , long time, both of us just simply gazing at the wonder and beauty of life around us. There is no spectacular vision, burning bush, or Lemurians in white robes to initiate me. It is simply a peaceful moment. Yet in that moment I feel a calming presence that brings a sense of connection to the oneness of life, and for this fool on the hill that moment means everything. 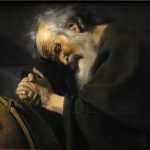 A Right Understanding of Karmatest, Uncategorized